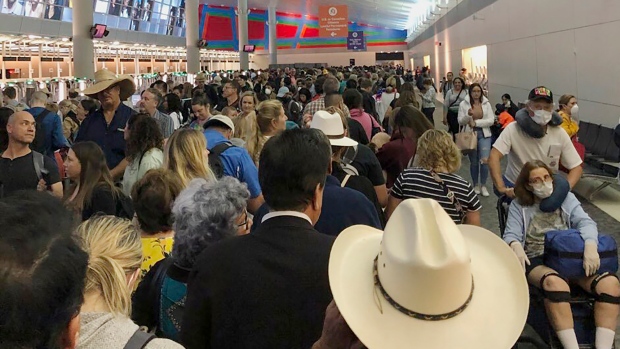 CHICAGO — CHICAGO — Harsh criticism rained on the Trump administration Sunday from state and local officials over long lines of returning international passengers at some U.S. airports that could have turned them into coronavirus carriers as they tried to get home.

Illinois Gov. J.B. Pritzker and Chicago Mayor Lori Lightfoot, both Democrats, lambasted the administration for allowing about 3,000 Americans returning from Europe to be stuck for hours inside the customs area at O’Hare International Airport on Saturday, violating federal recommendations that people practice “social distance.”

The passengers, many of them rushing home because of fears they would be stuck in Europe, were screened by federal customs and homeland security agents for coronavirus symptoms before they were allowed to leave the airport.

Long lines also formed Saturday in Boston, Dallas and others of the 13 airports that are accepting return flights from Europe. Conditions were better Sunday, but lines could again grow as the day progresses and more flights arrive.

“People were forced into conditions that are against guidance and are totally unacceptable,” Lightfoot said.

Lightfoot singled out Vice-President Mike Pence and his coronavirus task force for not talking with local officials before implementing the screening program. State and local officials could have offered “concrete suggestions” for how the program could have been implemented with the least disruption, she said, but the administration acted unilaterally.

“Thousands of travellers were forced to wait in exceedingly long lines, congregating in concourses and putting themselves and their loved ones at greater risk of exposure,” Lightfoot said. Passengers Sunday will likely be kept on their planes to manage the flow into the customs area, she said.

Texas Gov. Greg Abbot, a Republican and strong supporter of the president, tweeted Sunday that the lines in Dallas are “unacceptable & I’m working hard to get it fixed.” He said he had contacted the head of Homeland Security, acting Secretary Chad Wolf.

Pritzker said Sunday on NBC’s “Meet the Press” that the administration should have bolstered staffing at the receiving airports in anticipation of long lines. But instead, he said, passengers “were stuck in a small area, hundreds and hundreds of people, and that’s exactly what you don’t want in this pandemic.”

He predicted Sunday would “be even worse.”

“We are doing very precise Medical Screenings at our airports. Pardon the interruptions and delays, we are moving as quickly as possible, but it is very important that we be vigilant and careful. We must get it right. Safety first!” he wrote.

Acting Customs and Border Patrol Commissioner Mark Morgan said in a written statement Sunday that the agency is making improvements to its procedures, but that it must “balance our efficiencies with ensuring the health and safety of all American citizens through enhanced medical screening.”

“Everybody was nervous about it,” she said Sunday. “Everyone working there was confused and frustrated, and there were hands were tied, too.”

Even though she showed no signs of being sick, she now plans to quarantine herself on the organic produce farm she runs in Noblesville, Indiana.

Dr. Anthony Fauci, the government’s top infectious disease expert, said on “Fox News Sunday” that the airport crowds could spread the disease, but that they are likely to continue. Americans must understand that there is no need to rush back from Europe, he said, but “when people see a travel ban, they immediately want to hunker and get home.”

“Hopefully we don’t have more of that, but I think we probably unfortunately will,” he said.

The Dallas-Fort Worth Airport’s Twitter account responded to passengers who raised concerns about the cramped conditions, saying that its customer experience team was taking “extra precautions” and that hand sanitizer was available in all terminals.

For most people, the new coronavirus causes only mild or moderate symptoms, such as fever and cough. For some, especially older adults and people with existing health problems, it can cause more severe illness, including pneumonia. The vast majority of people recover.

Travellers from restricted countries in Europe, China and Iran are being advised to self-quarantine for 14 days after reaching their final destination in the U.S.

The worldwide outbreak has sickened more than 156,000 people and left more than 5,800 dead, with thousands of new cases confirmed each day. The death toll in the United States climbed to 61, while infections neared 3,000.

This story has been corrected to show that Illinois Gov. J.B. Pritzker spoke on NBC’s “Meet the Press,” not ABC’s “This Week.”