You Are Here Home Health News Trump’s 2016 win may have resulted in fewer boys born in Ontario: study 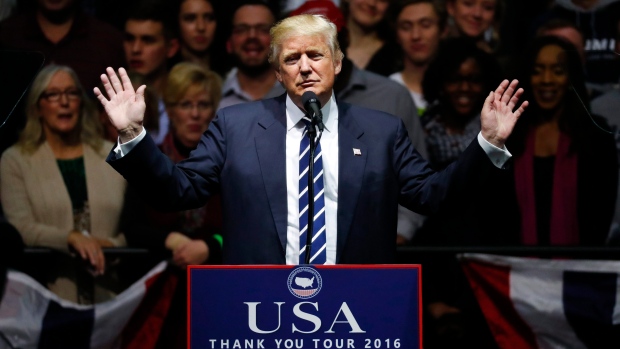 TORONTO — As U.S. President Donald Trump rallies support for his re-election bid south of the border, his surprising victory in 2016 may have had an unexpected effect on the sex ratio of babies born in Ontario.

According to new research, published in the journal BMJ Open on Monday, there was a short-term decline in the number of boys born in the province three to five months after the election.

What’s more, the shift in the sex ratio of newborn babies was apparent in only politically liberal-leaning areas and not in conservative parts, the study said.

“The idea being that liberal-leaning parts of the province might have perceived that event, the outcome of the election, as an adverse societal stressor whereas conservative-leaning parts of the province might not have seen it that way,” study author Dr. Ravi Retnakaran, an endocrinologist at Mount Sinai Hospital in Toronto, told CTVNews.ca during a telephone interview on Tuesday.

For the study, the researchers examined data from the Better Outcomes Registry & Network on all of the births in Ontario across three time periods – before the election, from April 2010 to October 2016, shortly afterwards, from November 2016 to February 2017, and later on, from March 2017 to October 2017.

After accounting for seasonal factors, which can affect the sex ratio at birth, the study’s authors found the lowest ratio of boys to girls in the year after the U.S. election occurred in March 2017, four months after the election. They also found the ratio subsequently recovered in the following five months.

“The unexpected outcome of the election led to the characteristic effect on the sex ratio in Ontario that we had predicted, that had been seen after disasters like terrorist attacks,” Retnakaran said.

While the association between newborn sex ratios and world events may seem unrelated, Retnakaran said there is evidence that stressful events, such as terrorist attacks or natural disasters, have led to the temporary fall in the proportion of boys to girls born in the months after.

For example, the pattern was detected in the months following the 9/11 terrorist attacks in 2001, the 2004 Madrid train bombings, the 2005 terrorist bombings in London, and the massacre in Norway in 2011.

Because he was already aware of this tendency, Retnakaran said he was interested in seeing if it would apply in the aftermath of the U.S. election

“The day after the election, I just noticed in society a particular mood or atmosphere and this kind of what I would characterize as this sense of anxiety,” he said. “So it suddenly dawned on me, ‘Wow, I wonder if this election could have that kind of effect on the sex ratio.’”

In order to test this theory, Retnakaran said he and his team had to wait three to five months after the election for the babies to be born to see if there was an impact on the sex ratio.

According to earlier evidence of this pattern, the adverse stressor will only affect women who are within a particular window of approximately 20 to 25 weeks gestation at the time of the event.

Retnakaran said at the time of conception, it’s believed there is a 50-50 proportion of boys to girls, but at birth there is actually a higher preponderance of males because there is a higher mortality for female fetuses than male fetuses.

“More boys are born than girls are born and this is because there’s a greater loss of female fetuses during pregnancy than there is of male fetuses,” he explained.

Except, however, during the period of 20 to 25 weeks gestation, which is when women are more likely to lose a boy than a female.

“Then three to five months later, that becomes apparent in the sex ratio because the male babies that would have otherwise been born are now not being born and hence the proportion of boys born at that time falls,” Retnakaran said.

The endocrinologist said it’s still unclear why women are more likely to lose a male fetus over a female fetus during that gestation window and how a stressful event affects that outcome.

As for how the upcoming U.S. election in November may play a role in future sex ratios in Canada, Retnakaran said he doesn’t think it will have the same effect that it did in 2016.

“Even though nobody knows what’s going to happen in the November 2020 U.S. election, I can’t imagine that there could be an outcome that would be as unexpected or shocking as the 2016 election was perceived,” he said.