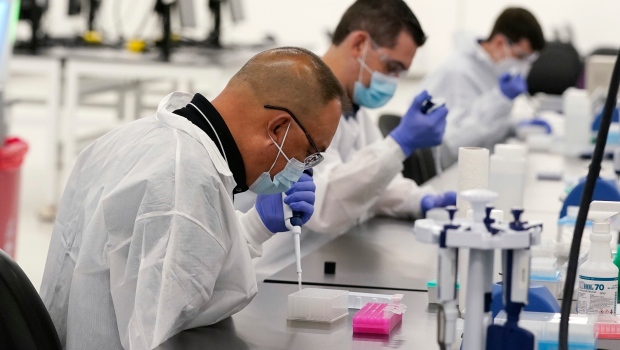 TORONTO — As coronavirus variants pose a threat to declining infection numbers in Canada, another kind of anomaly has been identified.

Researchers in New Mexico recently discovered what is believed to be the first recorded “recombination event” of the COVID-19 pandemic between a variant of SARS-CoV-2 that originated in the U.K. and another from California.

Though a less common occurrence than the variants that have been making headlines for months, recombination is a naturally occurring process documented with all coronaviruses. The hybrid variants don’t necessarily spell increased danger, said Dr. Sumon Chakrabarti, an infectious disease expert in Mississauga, Ont.

“People think that mutation is like X-Men and you’re getting something that’s going to be a super virus. But that’s not the case,” he told CTVNews.ca over the phone on Wednesday.

While it’s true that a “recombinant” could result in a more lethal, antibody-resistant hybrid, the reverse is also possible. “There are sometimes recombinants that occur that are at a cost to the virus,” said Chakrabarti. It could be like an athlete holding two powerful baseball bats, he said: They might hit a 500-foot home run with just one bat, but the ball won’t get very far if they’re holding both.

It’s unclear how much of a threat the new recombinant could be as the COVID-19 pandemic continues, having infected nearly 110 million people worldwide. But the combination of the more transmissible B.1.1.7 variant from the U.K. with the B.1.429 variant from California, which is reportedly able to resist some antibodies, is worrisome to epidemiologists. Earlier this month, computational biologist and HIV researcher ​Dr. Bette Korber of the Los Alamos National Laboratory in New Mexico briefed researchers on the recombination evidence at a webinar hosted by the New York Academy of Sciences. She reportedly said that her lab has identified just a single genome among thousands, but the discovery is still important.

“This kind of event could allow the virus to have coupled a more infectious virus with a more resistant virus,” she said, according to New Scientist, a U.K. tech and science website.

With the emergence of more variants of the novel coronavirus, recombination may pose a bigger threat since it can occur when someone is exposed to two different strains at once. The genetic material of the two strains is “spliced together,” combining multiple mutations at once, said Chakrabarti.

“With regular mutations, it happens from a single virus population,” he told CTVNews.ca. “Recombinant events happen when two slightly different viruses are in the same environment.”

But recombination doesn’t mean the world is poised to enter a new deadlier phase of the COVID-19 pandemic. Instead, the recombination could help researchers understand the evolution of the SARS-CoV-2 virus, which could inform how virologists adapt COVID-19 vaccines in the future to provide possible booster shots, as is done seasonally for other viruses like influenza, said Chakrabarti.

Recombination has been happening to some degree for the duration of the pandemic, but is only being identified now in parts of the world with the laboratory expertise to discover them, he said. Most of the time, mutations amount to small changes over time.

“You’re unlikely to see something that’s all of a sudden going to change the face of the pandemic,” he said. “Even if you have a virus that’s more transmissible that doesn’t mean that it’s going to be transmitted across a population.”

Human behaviour will make all the difference, if a deadlier recombinant strain spreads or not.