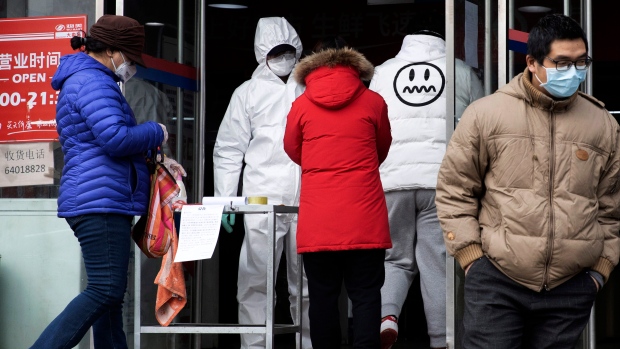 WASHINGTON — U.S. health officials reported the first U.S. drug shortage tied to the viral outbreak that is disrupting production in China, but they declined to identify the manufacturer or the product.

The Food and Drug Administration said late Thursday that the drug’s maker recently contacted officials about the shortage, which it blamed on a manufacturing issue with the medicine’s key ingredient. Regulators stressed that alternative medicines are available to treat patients.

The FDA previously said it had reached out to 180 drug manufacturers and asked them to check their supply chain and report any potential disruptions. The agency also said it had identified 20 drugs produced or sourced exclusively from China, but it declined to name them.

The FDA has good reason to not release the names of drugs facing potential shortages, said Rosemary Gibson, who wrote the book “China Rx” on that nation’s role in American health care.

“People might rush to buy it and that would create a worse situation,” said Gibson, a senior adviser at bioethics research group The Hastings Center. “In the context of shortages globally, you have to be very, very careful.”

More than 83,000 COVID-19 cases have been reported worldwide, nearly 79,000 of them in mainland China. Government officials there have severely restricted travel and imposed strict quarantine measures to try and stop the virus from spreading.

Restrictions on movements of people and goods have been imposed by at least 90 countries, and that’s disrupting flow of drugs and raw materials, said Nicolette Louissaint, executive director of Healthcare Ready, a non-profit group funded by drug distributors, government and foundations that tracks the impact of epidemics and natural disasters.

For decades, the pharmaceutical industry has shifted manufacturing to China, India and other countries to take advantage of cheaper labour and materials. Today, roughly 80 per cent of the ingredients used in U.S. medicines are made abroad, according to federal figures. India and other Asian nations rely on Chinese drug ingredients to make finished generic pills.

China ranks second among countries that send drugs and biotech medicines to the U.S., according to the FDA. It is also the top exporter of medical devices and equipment to the U.S.

The country is a major producer of antibiotics for the U.S. market, as well ingredients and medicines for common chronic conditions such as heart disease, said Louissaint.

The virus, which led to strict travel restrictions in Chinese cities home to more than 60 million people, has affected a range of industries. Some factories have tried to restart and run into problems getting the raw materials and components they need.

Chinese factories making pharmaceutical ingredients and drugs are still operating, with some trying to produce far more than usual and others still trying to get workers back, Louissaint said Friday. Cargo carriers are still transporting those products from China to other countries, she said.

“It is challenging,” but fortunately Chinese ports have remained open, Louissaint said.

She added that the FDA’s announcement of the shortage indicates the FDA’s tracking efforts are working and drugmakers are communicating with the agency.

The FDA said Thursday there are no reported medical device shortages related to the coronavirus. However, the agency said several Chinese device manufacturing facilities are being “adversely affected” by the outbreak due to staffing problems, including workers who have been quarantined.

The FDA said it is in touch with 63 device manufacturers with Chinese facilities that produce “essential” medical devices. While noting increased orders for masks, respirators, gloves and other protective gear, regulators said there are no reported shortages of those items in the U.S.

Under a 2012 law, drugmakers are required to notify the FDA of production or sourcing issues that could create medication shortages. The agency noted this week that medical device manufacturers are not bound by that law and “are not required to respond when the FDA requests information about potential supply chain disruptions.”