You Are Here Home Health News U.S. Supports Aid to North Korea for Fighting the Coronavirus 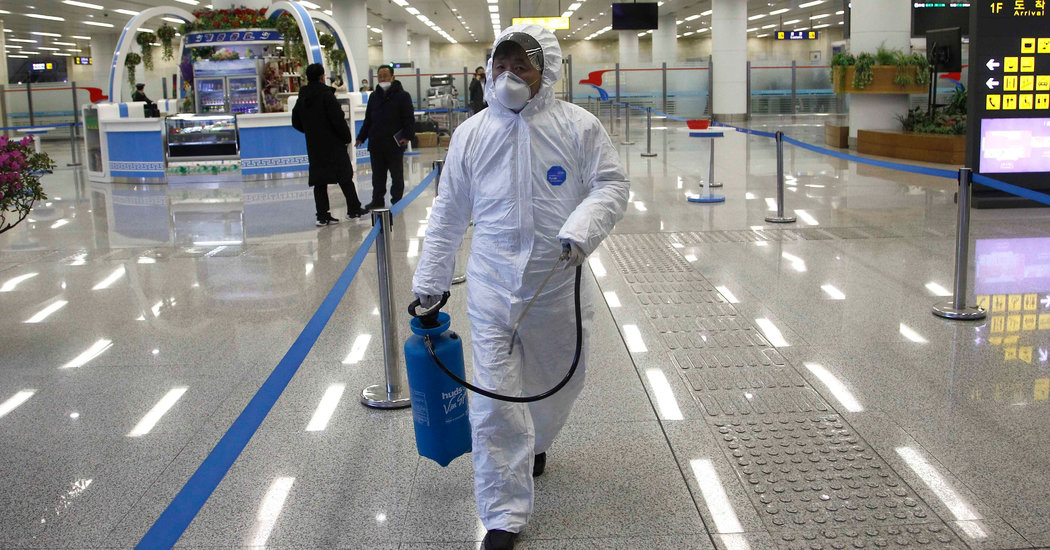 SEOUL, South Korea — The United States said it would approve humanitarian assistance to North Korea to help international aid agencies fight the coronavirus there, amid fears that the impoverished country may be hiding an outbreak.

North Korea has not reported any cases of the new coronavirus. But in the past week, some South Korean news reports, citing unnamed sources within the secretive North, said there had been deaths that were suspected to be related to the virus. The reports could not be confirmed.

North Korea shares a 930-mile border with China, where the coronavirus emerged. It has since spread to numerous countries; more than 1,300 deaths have been reported, almost all of them in China.

North Korea has taken aggressive steps to keep the virus out, including suspending all flights and trains to and from China. But the border has long been porous for smugglers, who ferry goods across the shallow river frontier that separates the two countries.

North Korea’s public health system is dysfunctional, and the travel restrictions have made it harder for the North to buy or smuggle medicine, goods or other supplies from China. Relief organizations have complained that American-led international sanctions against the North, imposed because of its nuclear weapons program, have prevented them from providing aid quickly.

This week, the Red Cross called for a sanctions exemption that would let it transfer money to its office in North Korea, describing it as “a lifesaving intervention.” It cited an urgent need for personal protective gear and testing kits to prepare for a possible outbreak in the North.

The United States has also expressed alarm, and it encouraged American and international aid groups to help the North counter and contain the virus.

“The United States is deeply concerned about the vulnerability of the North Korean people to a coronavirus outbreak,” Morgan Ortagus, a State Department spokeswoman, said in a statement.

So far, North Korea has said nothing about how many people it may have quarantined or tested for the virus. But it is clearly taking the threat seriously, having suspended international tourism and, more recently, extended the quarantine period for people with coronavirus symptoms, from 14 days to 30 days.

Its state media has carried photos of mask-wearing officials holding emergency meetings at disease-control centers and disinfecting ports and train stations. The North also asked South Korean officials to vacate a joint liaison office in the North Korean city of Kaesong as a precaution against the virus.

​Earlier this month, state media said health officials had stepped up inspections on “all routes leading to the capital city,” Pyongyang, which is home to North Korea’s elite, including the top leader, Kim Jong-un. It said the authorities were requiring all people passing through Pyongyang’s main train station to wear masks.

Amid the many signs that North Korea fears an outbreak, its state media has reported no public appearances by Mr. Kim since he watched a concert​ in Pyongyang a few weeks ago.

North Korea has also shut its ports and borders to foreign goods and summoned back​ officials who had been earning hard currency​ in China​, quarantining them on the border, Daily NK said. North Korea’s military​ has also been smuggling in​ large ​quantities of South Korean face masks​ through China, it ​said.

Kim Seung-eun, a ​Christian ​pastor​ and human rights activist​ in South Korea who ​works with informants inside the North, said on Friday that he had not heard of any deaths from the coronavirus in the country.

He said the North Korean authorities had drastically stepped up border controls, even ordering guards to fire at those attempting to cross the border illegally. That draconian measure has made it impossible for groups like his to smuggle refugees out of North Korea, he said.

“North Korea has to take such an extreme step because their medical infrastructure is so bad that if an epidemic breaks out, it could run out of control,” Mr. Kim said.

The coronavirus emerged as North Korea seemed to be retreating from a period of relative openness, with the diplomacy between Kim Jong-un and President Trump having produced no concrete agreements on ending the North’s nuclear arms program or the international sanctions. In recent months, North Korea has opened resort towns ​in hopes of attracting Chinese visitors ​and badly needed tourist cash. But the coronavirus has halted that effort.

The disruptions in border trade could hurt the national economy. More than 90 percent of North Korea’s official external trade goes through China.

“North Korea is under increasing stress because of the coronavirus outbreak in China,” said Leif-Eric Easley, a professor in the international studies division at Ewha Womans University in Seoul. “The revenue stream Kim was anticipating from tourism is running dry and the informal economy is suffering from draconian border and travel restrictions.”

“North Korea may be on lockdown now, but it will soon be in need of economic concessions,” he added.

That raises the possibility that Pyongyang could return to diplomacy — or resume weapons tests to strengthen its negotiating hand, analysts said. ​