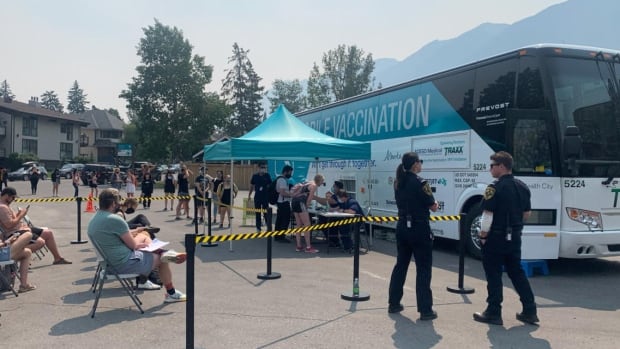 A new mobile COVID-19 vaccine clinic has administered more than 375 doses since it embarked on its journey in Kananaskis a little more than a week ago.

The bus, run by the Industry for Vaccination Coalition and Alberta Health, has stopped in Banff, Lake Louise, Calgary, Edmonton and Jasper so far.

It parked for four hours at the Heritage Festival in Edmonton on July 31 while two volunteers helped answer questions and directed people to the bus.

Sarah Mackey with Vax Hunters Alberta, said she connected with people on the ground to share information about the COVID-19 vaccine.

“There were quite a few people who clearly had just uncertainty and legitimate concerns about getting vaccinated,” Mackey said. “People are just worried, they’re anxious, it’s a stressful time.”

She and fellow volunteers, Janaya Matheson and Sara Borchiellini, have managed the Vax Hunters AB Twitter account since April, promoting ways to get more people vaccinated.

“We’ve been on social media a lot the last couple months, so it was really great to be out talking to people face-to-face and being able to address those hesitations and get people vaccinated,” she said.

Mackey said to address the more nuanced concerns, she directed people to speak to the nurses on the bus.

The mobile vaccination clinic is the brainchild of the Industry for Vaccination Coalition, a collaboration of 20 businesses and non-profit groups that formed earlier this year.

Scott Crockatt, vice president of one of the members —the Business Council of Alberta — said they plan to run the bus for two months.

“The partners in this are really committed to the mission and the mission is getting as many Albertans vaccinated as possible,” Crockatt said.

There’s no firm target for how many vaccinations they’ll give out, but they’ll run the mobile clinic for longer if needed, Crockatt said.

The coalition covers the costs to run the bus itself, including the gas, staff and the tents. Alberta Health is supporting the clinic and providing the Moderna and Pfizer vaccines, Crockatt said.

Getting a shot at the mobile clinic, like at all pharmacies and clinics in Alberta, is free and people don’t need an Alberta Health card to get vaccinated.

So far, nearly 40 per cent of the shots administered at the mobile clinic went to people who aren’t residents of Alberta, Crockatt said.

Some people working in the hospitality and tourism industries were unaware that the vaccination is free, he added.

This week, the vaccine bus is in Jasper and then in Sundre. On Saturday, it will stop in Abbotsfield in east Edmonton, a neighbourhood with one of the lowest uptakes for the vaccine in the city.

Saturday evening, the bus will be at the Edmonton Elks home opener game at Commonwealth Stadium.

The coalition determines the route in part by requests from municipalities and major employers like oil services camps and hotels, with the opportunity to stop at smaller locations like farms and ranches, Crockatt said.

After Edmonton, the bus will head to northern Alberta/

The coalition foresees the need for more mobile clinics in the future, Crockatt said.

“It seems likely at this stage that we’re going to be moving into a long-term disease management sort of phase.”