You Are Here Home Health News What’s the Risk of Catching Coronavirus From a Surface? 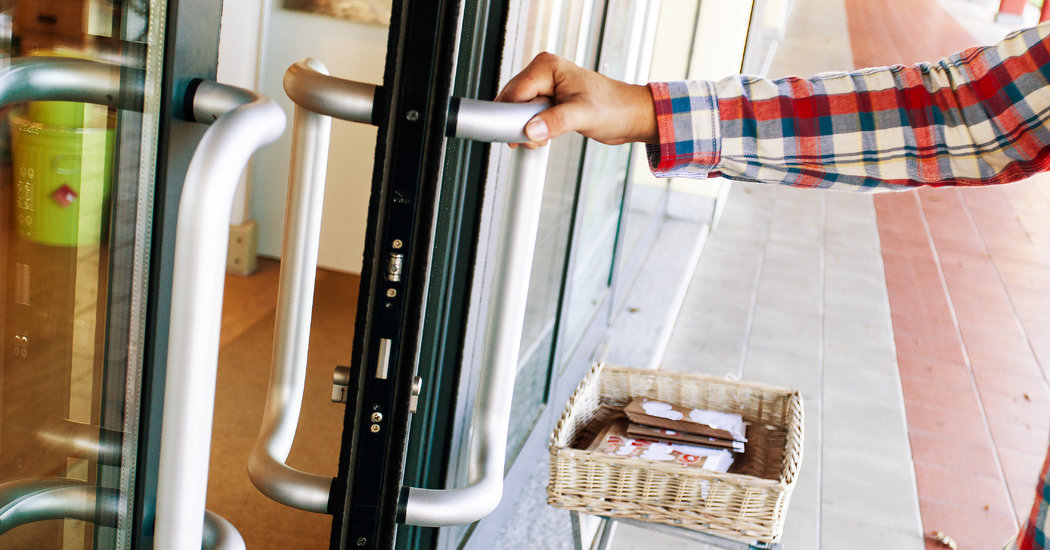 Fears about catching the coronavirus from contaminated surfaces have prompted many of us to spend the past few months wiping down groceries, leaving packages unopened and stressing about touching elevator buttons.

But what’s the real risk of catching Covid-19 from a germy surface or object?

The question has been on people’s minds lately, and there was some confusion after the Centers for Disease Control and Prevention made some edits to its website last week. Social media sites and some news outlets suggested the agency had downgraded its warnings and that surface transmission was no longer a worry.

The C.D.C. subsequently issued a news release to clarify that indirect contact from a contaminated surface — what scientists call fomite transmission — remains a potential risk for catching Covid-19.

“Based on data from lab studies on Covid-19 and what we know about similar respiratory diseases, it may be possible that a person can get Covid-19 by touching a surface or object that has the virus on it and then touching their own mouth, nose or possibly their eyes,” the agency wrote. “But this isn’t thought to be the main way the virus spreads.”

So does this mean we can catch coronavirus from touching a doorknob? Catching a Frisbee? Sharing a casserole dish?

The answer, in theory, is yes, which is why you need to wash your hands often and avoid touching your face. A number of studies of flu, rhinovirus, coronavirus and other microbes have shown that respiratory illnesses, including the new coronavirus, can spread by touching contaminated surfaces, particularly in places like day care centers, offices and hospitals.

“What they’re saying is that high touch surfaces like railings and doorknobs, elevator buttons are not the primary driver of the infection in the United States,” said Erin Bromage, a comparative immunologist and biology professor at the University of Massachusetts, Dartmouth. “But it’s still a bad idea to touch your face. If someone who is infectious coughs on their hand and shakes your hand and you rub your eyes — yes, you’re infected. Someone’s drinking from a glass, and you pick it up near the rim and later rub your eyes or mouth, you’re infected.”

Here’s how fomite transmission works. An infected person coughs or sneezes on their hands. Some of the droplets may splash onto a nearby surface, or the person spreads the germs by touching a faucet or countertop before washing his hands. Studies show that coronavirus can last up to three days on plastic and steel, but once it lands on a surface, the amount of viable virus begins to disintegrate in a matter of hours. That means a droplet on a surface is far more infectious right after the sneeze — not so much a few days later.

Next, you have to come along and touch the contaminated surface, pick up enough viable virus on your hands, and then touch your eyes, nose or mouth. If all goes well for the virus, you will get sick.

“There’s a long chain of events that would need to happen for someone to become infected through contact with groceries, mail, takeout containers or other surfaces,” said Julia Marcus, an infectious disease epidemiologist and assistant professor in the department of population medicine at Harvard Medical School. “The last step in that causal chain is touching your eyes, nose or mouth with your contaminated hand, so the best way to make sure the chain is broken is washing your hands.”

An outbreak associated with a shopping mall in Wenzhou, China, may have been fueled by fomite transmission. In January, seven workers who shared an office in a shopping mall became ill when one of their co-workers returned from Wuhan. The mall was closed, and public health officials tracked two dozen more sick people, including several women who had shopped at the mall, as well as their friends. None of them had come into contact with the original sick office workers. The researchers speculated that a women’s restroom or the mall elevators had been the source of transmission.

Other studies have used invisible fluorescent tracers — fake germs that glow under black light — to track how germs are spread from surfaces. The findings are unnerving. In one series of experiments, 86 percent of workers were contaminated when spray or powder tracers were put on commonly touched objects in an office. When tracer powder was put on a bathroom faucet and exit doorknob, the glowing residue was found on employees’ hands, faces, phones and hair. From a shared phone, the tracer spread to desktop surfaces, drinking cups, keyboards, pens and doorknobs. A contaminated copy machine button added a trail of fluorescent finger prints transferred to documents and computer equipment. And just 20 minutes after arriving home from the office, the fake germs were found on backpacks, keys and purses, and on home doorknobs, light switches, countertops and kitchen appliances.

A video making rounds on the internet shows how the black light experiment works. The glow germs are put on the hands of just one diner at a buffet, but by the end of the meal, everyone at the table has come into contact with the glowing germs. The video explains why scientists discourage the sharing of food during a viral outbreak.

But while those experiments show how germs can spread on surfaces, the microbe still has to survive long enough and in a large enough dose to make you sick. Eugene M. Chudnovsky, a professor at the City University of New York, notes that surfaces are not a particularly effective means of viral transmission. With the flu, for instance, it takes millions of copies of the influenza virus to infect a person through surface-to-hand-to-nose contact, but it may take only a few thousand copies to infect a person when the flu virus goes from the air directly into the lungs.

Dr. Chudnovsky, a theoretical physicist whose research has focused on the spread of the airborne infection, said a similar pattern is likely to be true for the new coronavirus, but the exact numbers are not known.

“I believe the C.D.C. is right when it says that surface transmission is not a dominant one,” said Dr. Chudnovsky. “Surfaces frequently touched by a large number of people, like door handles, elevator buttons, etc., may play a more significant role in spreading the infection than objects touched incidentally, like food packages delivered to homes.”

The bottom line is that the best way to protect ourselves from coronavirus — whether it’s surface transmission or close human contact — is still social distancing, washing our hands, not touching our faces and wearing masks.

“Hand washing is important not only for fomite transmission, but also for person-to-person transmission,” said Dr. Daniel Winetsky, a postdoctoral fellow in the division of infectious diseases at Columbia University. “The respiratory droplets we produce when speaking, coughing and sneezing fall mostly onto our hands, and can fall onto other people’s hands if they are within six feet from us.”