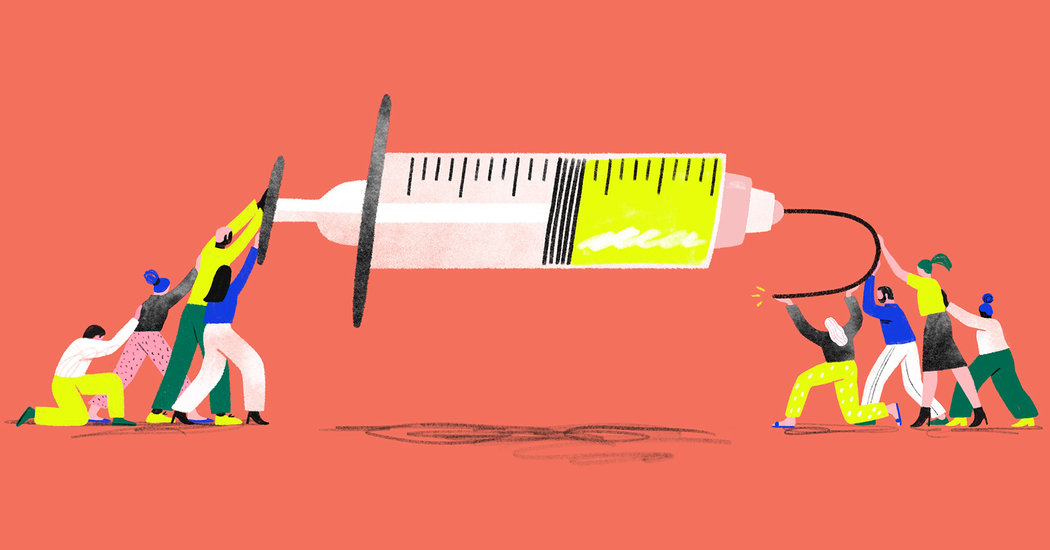 I was at a barbecue with a few of my closest friends last summer when the topic of vaccines came up. In the kitchen, while grabbing plates and silverware for the table, I flippantly muttered something like, “Anti-vaxxers are the worst.” I assumed we all shared the same stance. “I think I might be one,” my friend replied.

What ensued was a three-hour dinner conversation that went nowhere. We talked at each other, two of us pressing on about the public health benefits conferred by vaccines and the safety of them while my friend expressed her concerns and hesitancy. We managed to keep it civil: No one yelled or ended up in tears. But it was tense.

Weeks later, I called my friend to hear her out. (The barbecue was never supposed to turn into a two-against-one, defend-your-stance-on-vaccines debate.) I also wanted to remain friends. This is someone I have known for 15 years. I wanted to understand her point of view and how she got there.

She told me that just after giving birth to her first child the doctors gave her contradicting feedback. One said her newborn had high white blood cell levels and needed medication. Another said she didn’t. Ultimately she decided to trust her gut and refused the medication. Her baby was fine. And so the seeds of mistrust were sowed. It led her to question the medical establishment, including the recommended vaccine schedule.

The World Health Organization, Centers for Disease Control and Prevention and a wide consensus of public health officials agree that vaccines are safe and crucial for public health. Risks or side effects associated with vaccines are rarely serious, studies have found. Yet, for a variety of reasons, many people have concerns about them. Those concerns can lead to a decline in immunizations and the resurgence of vaccine-preventable diseases. (Though some people with certain conditions, like allergies or immunodeficiencies, should not get vaccinated.)

There are respectful ways to have these challenging conversations with vaccine-hesitant friends, colleagues, family members and even strangers, and perhaps persuade them about the safety and benefits of vaccines.

First, determine how open the person is to listening

Among those who question vaccines, there are two main groups: those who are definitively against widespread vaccinations and those who are vaccine-hesitant. The first group may subscribe to theories that have been debunked and misinformation that proliferates across social media, like the recent “Plandemic” documentary that promotes dangerous coronavirus theories.

The vaccine-hesitant group has concerns; maybe they have read an article or heard about a friend who said that their child had a bad reaction to a vaccine. Some are less averse to the actual vaccines than they are a government-mandated schedule. Many who identify as vaccine-hesitant do vaccinate their children, but on a delayed schedule. (Peer reviewed studies have shown that the current childhood vaccine schedule is safe.)

The three doctors I interviewed agreed that trying to persuade someone in the first camp that vaccines are safe will most likely not happen. “They won’t budge, it’s not worth it,” said Paul A. Offit, M.D., the director of the Vaccine Education Center and an attending physician in the division of infectious diseases at Children’s Hospital of Philadelphia.

Lynn, 30, of Pittsburgh, who asked that her last name not be used to avoid contention with her family, had to stop talking to her sister about vaccines because the conversations led to arguments. Lynn’s sister didn’t vaccinate her children, and Lynn would argue with her about vaccination for about a year after the birth of each child. . She was concerned for the safety of her nieces and nephews. Now, she said, she and her sister mostly avoid the topic.

Dr. Offit explained how people may not see the value in childhood vaccines for measles, mumps and rubella because science has largely eradicated those diseases in the United States.

There are far more people who fall into the vaccine-hesitant camp, Dr. Offit said. He said the majority of those with concerns about vaccines and are delaying or foregoing them are “convincible.” So, how does one start the conversation?

Be prepared, but don’t overdo it with statistics

Vaccination is a charged topic. When people feel judged about their parenting decisions, emotions will run high. It’s not the kind of discussion to wander into without warning at a Thanksgiving gathering or a birthday party, cautions Dr. Pooja Lakshmin, M.D., a perinatal psychiatrist and clinical assistant professor of psychiatry at the George Washington University School of Medicine. “You should go into it fully prepared and intentionally,” Dr. Lakshmin said.

It also may be difficult to resist bringing up articles, statistics, studies and anecdotes to make your case. But Dr. Lakshmin said that “getting into a back and forth about facts isn’t going to be helpful either.” It inevitably devolves into one-upmanship and, she said, “It’s just a volleyball being tossed back and forth. Nobody is digesting the facts.”

Emily, 35, a mother of three from Ithaca, N.Y., who chose not to vaccinate her children, said conversations she’s had in which facts and statistics are tossed around go nowhere. “That’s not a human discussion,” said Emily, who asked that her last name be withheld to protect her family from online harassment. “These are issues that need compassion and facts alone don’t have compassion.”

Have a one-on-one conversation and face to face

You want to create a space to have the conversation that feels safe for everyone. I spoke to many vaccine-hesitant parents who expressed fear of being labeled “anti-vaxx” or judged for their parenting.

“I don’t feel safe speaking out about vaccines,” said Sophie Jaffe, the Los Angeles-based founder of wellness company Philosophie and mother of three. Jaffe described herself as “right in the middle” of the vaccine spectrum, with two kids fully vaccinated and one on a delayed schedule. She believes we should “lean into” these conversations instead of shying away from them, and that they’re easier to have if both parties feel safe being vulnerable.

To ensure a safe space and lay the groundwork for a productive conversation, Dr. Lakshmin suggested that these conversations happen one-on-one. And because face-to-face conversations may be, for many, only possible by video chat or on the phone during social distancing mandates, consider the medium as well as the message.

Listening sounds simple but it can be challenging when both parties come in with deeply held convictions. And these conversations only work when people feel heard.

Sabrina H. Zubair, a pediatrician at Northwestern Medicine Central DuPage Hospital, said she’s found the best approach is to “really listen to the parents and their concerns and come at it from an objective nonjudgmental way.”

Katie Sandlin, 32, who works as a curriculum specialist at the University of Alabama in Tuscaloosa, has many friends and family members who do not vaccinate their children. Sandlin said, “Before I go explaining why they’re wrong, I need to know their perspective and their reasons for being anti or hesitant and try to find common ground. I have to check my personal passion about the issue.”

Dr. Lakshmin recommends asking open-ended questions and restraining from interjecting your point of view. “Be curious about their experience,” she said. Think of it like an informal interview. “Find out when they first started to have questions,” she said. “What happened that made them start to think twice?”

After I listened to my vaccine-hesitant friend’s story about the conflicting information she had received from doctors after giving birth, I was able to better understand her point of view, even if I didn’t agree with it, and empathize with her.

Try empathizing around something you have in common, like being a parent. “At the end of the day, every parent wants to do what’s best for their child,” Dr. Zubair said. “Sometimes they have different information and they’re scared.”

One of the most common approaches to having a conversation about vaccines, and also one of the most surefire ways to ensure it ends badly, is wanting to convince the other person that you are right.

Letting go of winning is key to these conversations, Dr. Lakshmin said. “You don’t want to be focused on whether you’re getting your point across or who is the one who is convincing the other,” she said. “You want to understand where this person is coming from.”

“Having a right or wrong approach only creates more disconnect and lack of understanding of the other side,” Jaffe said.

Keep having the conversation

This won’t be a one-and-done conversation if you want the result to be a willingness to reconsider vaccinating. The goal, Dr. Lakshmin said, is to get to a second conversation.

Mary, 65, a retired registered nurse from Dayton, Ohio, who asked not to include her last name to protect her family from any backlash, continues to try to have the conversation with family members who do not vaccinate their children. “I just try to keep an open heart and hope that I can do more by keeping the dialogue open then by arguing and shutting it down,” she said. She said she tries to refrain from being adversarial while trying to communicate the risks they are taking by refusing to vaccinate. “I haven’t had a lot of effect on them but I keep trying,” she said.

Dr. Zubair said that she will always try to have the conversation, even with her patients who are deeply opposed to vaccinating their children. “Sometimes parents need to cultivate a relationship with me and it will take a couple of months for them to trust me and follow my suggestions,” she said. And even if the parents don’t change their minds, sometimes the kids decide for themselves. “I’ve had some kids, as they get older, say, ‘I want to do the vaccine.’”

Leah Chernikoff is the former digital director of Elle magazine.