You Are Here Home Health News ‘Where the tragedy really lies’: The crisis in Canada’s long-term care homes 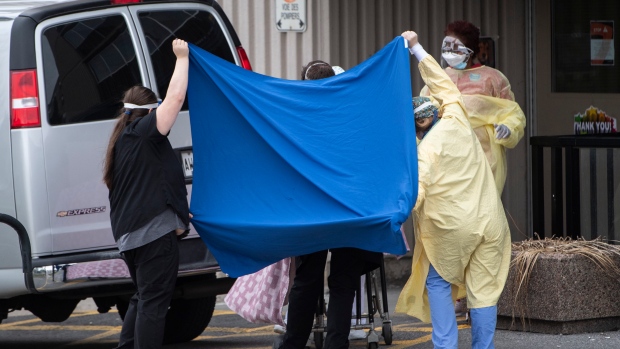 TORONTO — The novel coronavirus pandemic is hitting long-term care homes in Canada disproportionately harder than in other countries that make such data readily available, according to new research.

A report released Sunday by the International Long-Term Care Policy Network (ILTCPN) found that those who live in long-term care homes comprise 62 per cent of Canada’s COVID-19-related deaths – the highest share in any of the 13 countries it studied. The report does not include the U.S., the U.K. or Italy, where researchers said deaths are not broken down in this way in public data, but does include the hard-hit nations of Germany and France.

Other indicators, however, suggest the ILTCPN report may only be capturing part of the crisis playing out at Canadian senior care facilities. The Public Health Agency of Canada said Tuesday that COVID-19 outbreaks at long-term care homes are responsible for 82 per cent of coronavirus-related deaths in Canada.

“We’re seeing that the real epicentre of this epidemic has been long-term care homes across the country,” Dr. Samir Sinha, director of geriatrics at Mount Sinai Hospital in Toronto, told CTV’s Your Morning on Wednesday.

WHY ARE THEY MORE VULNERABLE?

Long-term care homes are particularly susceptible to viral diseases for plenty of obvious reasons, including that their elderly residents are more likely to be immunocompromised and extra-vulnerable to viruses.

Beyond that, though, keeping a large number of people in a confined space creates conditions that make it easier for a virus to thrive.

But that’s true all over the world, so what explains the Canadian numbers?

“Even the little community transmission we’ve had has been able to get in and spread around and spread between homes,” Sinha said.

“That’s where the tragedy really lies for Canada.”

Sinha’s explanation for how COVID-19 could be so destructive in long-term care homes while the rest of the country has avoided such a severe hit echoes that of many others who have closely studied the issue. He said Canada’s senior-care sector has long struggled with underfunding and neglect, leading to consequences that include workers being employed at multiple homes and frequently moving between them, making it easier to spread a virus from one facility to another.

Additionally, he said, those employed by long-term care homes are often paid significantly less than they would be to perform the same functions at hospitals, and may not receive benefits or paid sick days – meaning they may be less likely to stay away from work even when they feel sick.

‘A GAME OF CATCH-UP’

Neglect of long-term care homes is a concern across the country, but the impact COVID-19 is having at seniors’ residences varies considerably in different parts of Canada.

According to the National Institute of Ageing at Ryerson University in Toronto, more than 80 per cent of COVID-19 deaths in Ontario can be linked to long-term care homes. Quebec has a similar figure, and 35 of the 41 deaths in Nova Scotia are connected to one long-term care home in Halifax. Death tolls in long-term care homes in all three provinces are rising, even as the curve seems to be flattening outside the homes.

Ontario and Quebec have even called in the military to help bolster the ranks of front-line workers in their hardest-hit long-term care homes.

On the other side of the country, though, long-term care homes seem to have been somewhat spared. In B.C., there had been 74 deaths linked to such facilities as of Tuesday – still a high proportion of the total deaths, but nowhere near as many per capita as in the Eastern provinces.

“They actually were the most decisive and quick to act,” he said, noting that requirements for caregivers to wear surgical masks and prohibitions on working at multiple homes went into effect in B.C. in March.

“Those provinces are all playing a game of catch-up,” he said.

“This is a tricky virus that we need to take seriously. We can’t take half-measures when we’re trying to fight COVID-19.”