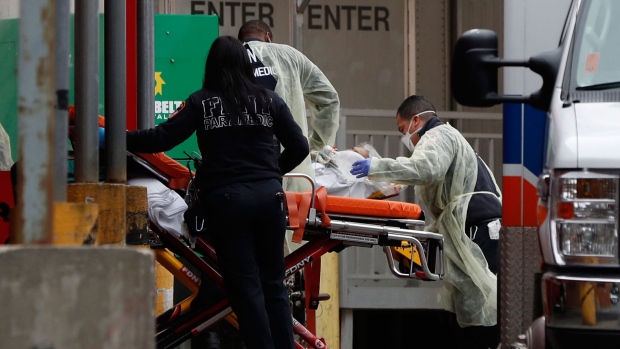 A COVID-19 vaccination site in a Latino neighbourhood in New York City hard hit by the pandemic saw an overwhelming number of white people from outside the community show up to get the shot this month, city leaders say, laying bare a national disparity that shows people of colour are being vaccinated at dramatically lower rates.

Vaccine appointments were initially offered to people age 65 and older who live in New York state.

Lawmakers who represent Washington Heights and a doctor who staffed the site last week said the first wave of vaccinations went to many White New Yorkers over 65 who travelled to the Armory from other parts of the city and state.

“The more I learn about this, the angrier I get,” de Blasio said during a virtual press briefing. “Somehow instead of focusing on the Latino community of Washington Heights, a place that really was hit hard by COVID, instead the approach was somehow conducive to folks from outside the community coming and getting vaccinated but not folks who live right there in Washington Heights. Totally backwards.”

‘NEW YORKERS OF COLOUR’ WERE TO GET THE SHOTS

The issue at the Washington Heights site is a glaring example of the inequity in vaccine access across the country.

In a news release announcing the launch, Cuomo said the goal of the partnership with New York-Presbyterian, Weill Cornell Medicine and Columbia University Irving Medical Center was “making sure New Yorkers of colour aren’t left behind.”

CNN reached out to New York-Presbyterian on Wednesday to ask about the disparity and a hospital spokeswoman provided a statement saying “effective immediately” the site would dedicate all appointment slots to New York City residents, with at least 60 per cent reserved for eligible residents in the Washington Heights, Inwood, North and Central Harlem, and South Bronx communities.

New York-Presbyterian said in an email to CNN Friday that in the last two days more than 80 per cent of the people vaccinated have been residents of those communities.

“An ongoing engagement initiative is focused on reaching eligible Northern Manhattan residents and getting them registered for appointments,” the hospital said in its statement Wednesday. “This process is being undertaken in partnership with more than 40 community-based and faith-based organizations and other partners, and is focused on providing access, overcoming hesitancy and addressing persistent inequities.”

More than 25,000 people have been vaccinated at the site since it opened, according to the hospital. New York-Presbyterian did not have a racial breakdown of the vaccine recipients.

Washington Heights and neighbouring Inwood, which according to the 2018 NYC Health report are 72 per cent Latino, have been a hotbed for Covid-19 cases.

Latinos make up 30 per cent of deaths in New York City.

In Washington Heights/Inwood, 37 per cent of residents have “limited English proficiency,” according to the 2018 NYC Health report.

A Jan. 14 statement on the state of New York’s website said people who were eligible to get the vaccine could sign up through a portal site for Columbia, New York-Presbyterian, and Weill Cornell Medicine patients or create a new account on a separate page.

“It’s like ‘The Hunger Games,’ ” Levine said. “People who don’t have a computer, don’t have good internet, aren’t comfortable with technology, maybe have limited English language skills, they are not getting through. And that’s reflected in who is showing up at these sites.”

Dr. Susana Bejar of Columbia University Irving Medical Center said she witnessed the disparity in Washington Heights firsthand when she volunteered at the Armory as an appointment verifier on Jan. 23.

Bejar said of the 2,400 people who received the vaccine that day, most were not from the local community. “Simply put, I’ve never seen so many White people in Washington Heights,” Bejar tweeted on Sunday.

Bejar said the site needs to prioritize Washington Heights residents by allowing same day and walk-in appointments, reserving vaccines for those who live in the community, offering help to people who are struggling to sign up on the smartphone app, and ensuring residents have time to schedule their appointments.

“It’s hard to do both speed and equity,” Bejar told CNN. “When the vaccines are primarily distributed through a smart phone application in English to whoever refreshes the application first, longstanding structural inequities will replicate themselves unless the medical community makes a conscious and consistent effort to address them.”

THE NEED FOR COMMUNITY PARTNERSHIPS

Disparities in who is getting the COVID-19 vaccine is a nationwide problem.

A CNN analysis of 14 states found vaccine coverage is twice as high among white people on average than it is among Black and Latino people.

The problem is compounded by the fact that New York has seen a shortage of vaccines, with Cuomo saying this week that there were not enough dosages for the seven million people who are eligible to get the shot under federal guidelines.

“We are nowhere near the supply we need,” De Blasio said at the Friday press briefing.

Rep. Adriano Espaillat (D-NY) said his office received several complaints about the local community being left out of the vaccinations at the Armory. Espaillat said he believes it was an oversight and that partnerships with local churches and senior centers will be critical for vaccination efforts in Washington Heights.

“From day one I have been concerned about the vaccine distribution not allowing rich people to make their way in and push our people out so they can jump the line and get the shot first,” Espaillat said. “I think it’s fixed now but we are going to monitor it for the next few days.”

Community groups in Washington Heights say they need to be involved in all distribution efforts if health-care leaders want to reach people of colour.

Jon-Paul Dyson, program director of Community League of the Heights, or CLOTH, said many residents don’t have Wi-fi or email access so they rely on word of mouth, literature in the mail or their social service providers to get information.

Dyson said he is working with the health-care community to help get residents vaccinated.

“Education is the biggest piece that’s missing right now,” Dyson said Thursday. “The locations of where to go, the transportation for our seniors to get there, all of the above.”