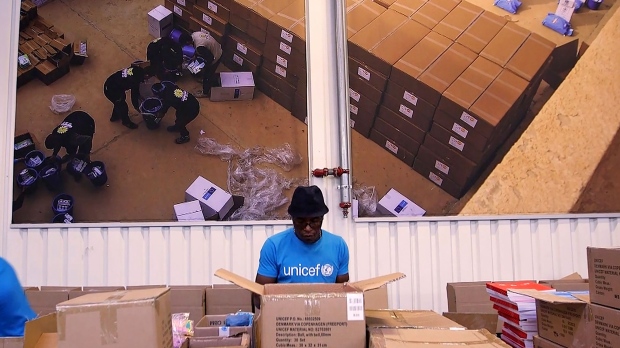 It’s called COVAX — and it may be the best hope in vaccinating the world.

The relative obscurity of this vaccine program belies its critical role in the global battle against COVID-19. Indeed, COVAX may well be the most important acronym of 2021. As vaccine nationalism rears its ugly head, it’s the best — perhaps the only — bet on getting billions of doses to lower- and middle-income countries.

COVAX is an entity run by a coalition that includes the Vaccine Alliance known as Gavi and the World Health Organization (WHO), and is funded by donations from governments, multilateral institutions and foundations. Its mission is to buy coronavirus vaccines in bulk and send them to poorer nations that can’t compete with wealthy countries in securing contracts with the major drug companies.

It has secured almost 2.3 billion doses for distribution this year. Of that total 1.8 billion should be made available to 92 of the world’s poorest countries — the majority of which (1.3 billion) will be at no cost.

Gavi has plenty of experience in getting vaccines to populations in need — it has helped vaccinate half the world’s children against other diseases, such as polio, meningitis and typhoid. But the COVID-19 campaign dwarfs those programs.

Shipments of coronavirus vaccine through COVAX will begin this month and ramp up in the second half of the year. Countries in Latin America and the Caribbean will be among the first in line, receiving some 35 million doses of the Pfizer-BioNTech and AstraZeneca vaccines by the end of June.

Countries have to submit a detailed plan for handling and distributing the shot — any country that’s signed up to the program is eligible to receive a vaccine. Some nations are financing their own share of vaccines to be delivered through COVAX, but 92 are eligible for deeply discounted or free shipments.

The Pan American Health Organization (PAHO) says no distinction will be made between countries that are paying for the vaccines and those that are receiving them for free.

For now only two vaccines are approved for distribution through COVAX — those made by Pfizer-BioNTech and AstraZeneca — but Gavi says it will need as many vaccine candidates as possible to reach its target, “once they have received approval from a stringent regulatory authority and/or prequalification by the WHO.”

Several countries in eastern Europe, including Ukraine and Moldova, are also eligible for subsidized COVAX supplies.

More than a billion of the doses needed are likely to be produced by the Serum Institute of India (SII), the world’s biggest vaccine maker, at a cost of about $3 per shot, thanks to collaboration by Gavi, the Bill & Melinda Gates Foundation and SII.

It’s an impressive effort, but hardly sufficient. For a start ‘secured’ doesn’t mean obtained. Gavi itself warns there’s “a big if, with uncertainties around capacity, funding and country readiness.” Governments have to submit detailed plans to show they can distribute the doses they get and identify areas where they need help.

The logistics involved are daunting. The UN Children’s Fund — which will be one of the main distributors — is trying to double its transport capacity this year so it can shift 850 tonnes of COVID-19 vaccines per month.

A bigger hurdle faced by COVAX: money. So far it has raised more than US$6 billion but is seeking to raise “an additional $2.8 billion in 2021 — $800 million for research and development, and at least $2 billion for vaccines for lower-income countries,” a Gavi spokesman told CNN.

Among the major donors so far have been the U.K. ($750 million), the European Union (nearly $600 million) and Canada ($250 million). The Biden administration has pledged to rejoin COVAX, which the Trump administration boycotted.

Aurélia Nguyen, managing director of COVAX, told CNN that the facility needed at least another $2 billion in 2021 to be able to procure and deliver the doses anticipated.

Nguyen said that “without a concerted effort, lower-income countries will be left behind because of restrictions on their financial capabilities.”

Raising the necessary funds this year will be a tall order. Internal Gavi documents obtained by Reuters in December warned that if vaccine prices are higher than forecast, supply is delayed or revenues fall short, COVAX faces the prospect of failure.

That will depend on a massive ramping-up of the program in the second half of 2021. WHO officials expect that just 3.3% of the populations of low-income countries will be vaccinated by the end of June. India, Pakistan and Nigeria will receive the most doses according to COVAX, receiving 97.1 million, 17.1 million and 16 million doses respectively.

In the case of India, that allocation would treat less than 4% of its population. Latin America and the Caribbean should receive enough doses through COVAX for nearly 20 million people by the end of June, but the region’s population is 500 million.

By contrast, many rich countries are aiming to get their entire populations vaccinated by the final quarter of 2021. In Germany, Chancellor Angela Merkel has set a target of September 21 for every adult to be offered a vaccine.

Some middle-income countries in the COVAX program are hedging their bets, going for a hybrid approach that includes direct purchases from vaccine makers. Colombia and several countries in the Balkans secured bilateral deals while waiting for COVAX to kick in.

The African Union has also entered the market — securing 670 million doses of different vaccines in addition to the COVAX program.

Chinese vaccines — none of which had been approved for use by the COVAX facility by the beginning of February — may make up part of the shortfall in the developing world. Chinese authorities have embarked on an ambitious round of vaccine diplomacy, and have pledged to donate 10 million doses of Chinese-made vaccines to COVAX.

“Many countries have bought more vaccine than they need,” Tedros said in January. “We now face the real danger that even as vaccines bring hope to those in wealthy countries, much of the world could be left behind,” he said.

It wasn’t right, he added, that younger, healthy adults in rich countries could get the vaccine before health care workers and older people in poorer countries, especially as new variants of the virus emerged.

Gavi told CNN: “Every time a new bilateral deal is done, it reduces the potential supply to COVAX, so we continue to urge manufacturers and governments to support our work.”

The longer it takes to achieve vaccination globally, the greater the risk that new variants may flourish. However, Gavi told CNN that its partner — the Coalition of Epidemic Preparedness Innovations — is investing in the ‘next generation’ of vaccine candidates, which will give the world additional options to control COVID-19 in the future.

If, as is widely expected, the coronavirus vaccine is a yearly requirement, pressure on supplies will not let up. Long before most of the developing world is vaccinated, people in wealthy countries could be receiving their second annual dosage.

Tedros’ comments are echoed by Dr. Seth Berkley, CEO of Gavi, who criticized a sense of “vaccine panic” among richer countries.

“We will only be safe anywhere if we are safe everywhere,” he said.

Going further back, Africa only received life-saving anti-retroviral treatments several years after they were widely available in the developed world, even as the continent suffered catastrophic death rates from HIV/AIDS.

The director of the Africa Centers for Disease Control and Prevention, John Nkengasong, says that tackling COVID-19 needs greater urgency.

“We need to achieve a 60% [vaccination] target within two years” in Africa, he said. Otherwise, he warned, “the virus will be endemic in our communities.”

Tedros has used stronger language. Unless COVAX gets the resources it needs, the world faces a “catastrophic moral failure,” he said.