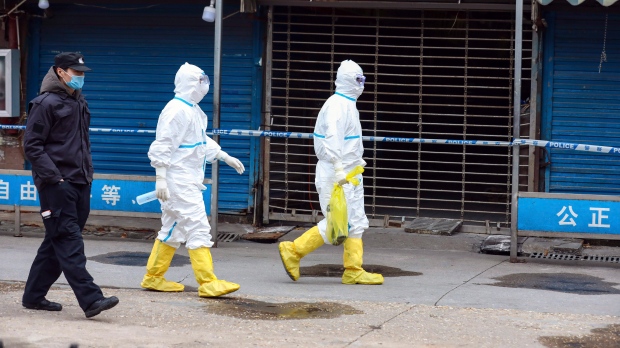 The United States is closer than ever to beating COVID-19, with half the country vaccinated and more restrictions lifting.

But we’re as far as ever from knowing how this virus, which shut down the world, came to be — which is as frightening as anything, since there’s growing suggestions that it didn’t just occur naturally, as many experts have long argued.

The U.S., with increasing urgency, is calling for more study, warning about the stakes for future pandemics, and more openly considering the idea that mistakes or an accident in a Chinese lab caused the COVID-19 pandemic.

A U.S. intelligence report found that several researchers at China’s Wuhan Institute of Virology fell ill in November 2019 and had to be hospitalized, a new detail about the severity of their symptoms. It’s not clear the researchers contracted COVID-19 and the lab strongly denied the report, calling it a lie to push the so-called lab-leak theory for the disease origin.

Scientists affiliated with the institute have previously said the institute did not come into contact with COVID-19 until December 30.

The U.S. had actually provided some funding for the study of coronaviruses and their transmission through bats, which had made it to the Wuhan Institute of Virology.

On Capitol Hill Tuesday, Dr. Anthony Fauci, the director of the National Institute of Allergy and Infectious Diseases, said it would have been a “dereliction of duty” not to fund earlier coronavirus research in bats in China.

“You don’t want to study bats in Fairfax County, Virginia, to find out what the animal-human interface is that might lead to a jumping of species,” Fauci said, adding the U.S. had to go “where the action is.”

Separately, at the White House, Fauci said many scientists still believe the disease occurred naturally, but it’s also imperative to get to the bottom of it with more investigation.

An adviser for the World Health Organization, Jamie Metzl, said the lab-leak theory is possible while scientists were “poking and prodding and studying” viruses with the good intention of developing vaccines.

“Then I believe what possibly happened was there was an accidental leak followed by a criminal cover-up,” said Metzl, who served in the Clinton administration in the U.S. Department of State and is a senior fellow at the Atlantic Council.

Fauci, the top infectious disease expert in the US, also said this week he is not convinced the disease occurred naturally and pushed for more investigation.

That is the takeaway here: There needs to be more investigation.

An in-depth study conducted by the WHO with the Chinese government, published in March, explored different possible origins of the disease and concluded that while it was not yet provable how the disease evolved, it was likely it was transferred to humans either directly from bats, or more likely from an intermediate species that got it from bats and then passed it along to humans.

The WHO report argued the lab-leak theory was “extremely unlikely,” although it cited the lack of infected lab workers before December as an argument against the theory. The U.S. intelligence report now suggests lab workers were sick earlier than December.

Further, even when it was published, WHO officials called for additional investigation and openness from the Chinese.

Early in the outbreak, which China did not appropriately warn the world about, Chinese officials blamed transmission on an early hotspot, a seafood market in Wuhan, although that seems now to be essentially a lie, according to Metzl.

In fact, there’s ample evidence the Chinese government tried to cover the existence of the virus up. In February, CNN published a look at whistleblowers and truthtellers who warned of the virus as it was taking hold, and who paid the price. Some have gone missing, others have been detained by Chinese authorities, while others contracted and died from COVID-19.

That report includes a timeline of warnings from doctors in China compared to inaction by the government.

China has been unwilling to submit to an open investigation; it insisted on strict parameters for the earlier WHO study. The U.S. government and others have criticized that lack of transparency and the WHO has also called for further study. The Biden administration has re-joined the WHO after the Trump administration pulled the US from the global health organization.

A group of prominent scientists with relevant experience criticized the WHO report for not taking the lab-leak theory seriously enough — it was dismissed in a few pages of a several hundred page report.

“We must take hypotheses about both natural and laboratory spillovers seriously until we have sufficient data,” the scientists wrote in Science Magazine.

Closed doors have also helped conspiracy theories grow. The more evidence there is for the lab leak theory, the more it validates people like Arkansas Republican Sen. Tom Cotton, who has suggested further investigation into the idea that the virus was created intentionally as a bioweapon. There’s no evidence specifically supporting that claim and experts still say it is unlikely. (Cotton’s office reached out to What Matters on Wednesday to say the senator believes it is “a fairly unlikely hypothesis that nonetheless needed to be investigated along with all other possible options.”)

The Washington Post published a look at how questions — raised by Republicans like Cotton as well as members of the Trump administration, and now of the Biden administration — have led to a reassessment of the origins of the disease, which have not definitively been traced.

Dr. Paul Offit, an infectious disease expert at the University of Pennsylvania Perelman School of Medicine told CNN’s Wolf Blitzer it was unlikely the Wuhan lab had manipulated the virus to make it more contagious using controversial gain of function research, but we’ve got to find out.

This will happen again

While Chinese authorities have stayed unwilling to allow such an open investigation, Offit said the world needs it in order to guard against another pandemic.

“What I do know is they have to allow this,” Offit said. “This is now the third pandemic strain that has raised its head in the last 20 years. The first was SARS 1, the second was MERS. I think that we can assume that we’re not done with this.”

And, he went on: “I think that we need to be able to know this the minute it happens. I mean it is unfair that we had to rely on a whistleblower in China to tell us that there was a virus that was circulating in Wuhan that was killing people. That delayed things. It didn’t give us the chance to act as quickly as we needed to act and I think they are culpable on that one.”