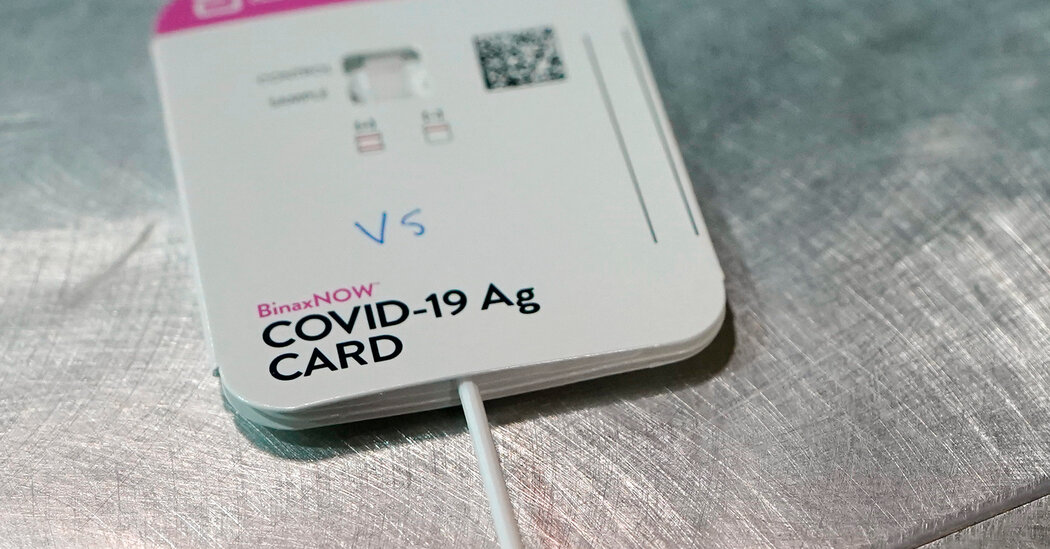 Rapid antigen tests are the least expensive (about $12 per test) and are available in retail stores and online. (They typically aren’t covered by insurance.) The BinaxNOW test, made by Abbott, contains two rapid antigen tests per box and costs around $24. To take the test, just swirl the swab in both nostrils and place in a special card. After 15 minutes, the result reads much like a pregnancy test: two pink lines indicate you’re positive for Covid-19. The QuickVue At-Home test, from Quidel, is similarly priced. After swabbing your nose, dip the swab in a solution in a test tube, and then in a test strip. You’ll get results in about 10 minutes.

The rapid antigen tests are less reliable for finding Covid-19 in people with low viral loads compared to the “gold standard” P.C.R. tests you’d get from a health care provider. One study found that a rapid home antigen test had a 64 percent chance of correctly spotting the virus in people with symptoms who had tested positive on a P.C.R. test. (The test caught only about 36 percent of those who had the virus but didn’t have symptoms.)

But don’t be dissuaded by those numbers. The affordable rapid antigen tests provide a reliable quick check to identify people with infectious levels of virus. For example, let’s say you want to invite friends into your home who are unvaccinated or who have an unvaccinated child. Before hosting an indoor gathering, you can reduce the risk of asymptomatic spread and infection by 90 percent or more if all guests use a rapid antigen test within an hour before the event, said Dr. Mina.

Rapid testing can also be used as an added layer of protection before spending time with people who are at high risk of complications from Covid-19, such as those with immune problems or undergoing cancer treatments. Neeraj Sood, a professor and vice dean for research at the University of Southern California and director of the COVID Initiative at the U.S.C. Schaeffer Center, said that even though he’s vaccinated, he would use rapid testing to take extra precautions around such people.

“If I was going to hang out in an enclosed space with a friend who’s getting chemotherapy and hasn’t gotten the vaccine, then I would do two tests,” Dr. Sood said. He would take one rapid antigen test three or four days before visiting the friend, and another test the same day of the visit. “If both are negative, I’m very confident I don’t have Covid, and I’m not going to transmit it to my friend,” he said.

Rapid testing could also be used to make a small family indoor gathering or a child’s birthday party that included a mix of vaccinated and unvaccinated people safer. “If you put that extra layer in of home testing, I think you’re all making each other more safe,” said Irene Peterson, a professor of epidemiology and health informatics at University College London. “Or you could decide not to have the party.”

If you want more certainty than a rapid antigen test can provide, you can consider a more costly rapid home molecular test. These tests work by detecting the virus’s actual genetic material (RNA) and amplifying it to determine if you’re infected. A home rapid molecular test works nearly as well as the P.C.R. tests given at testing centers that are processed by a laboratory, but they are also more expensive than the home antigen tests. Lucira makes a highly-accurate molecular test for $55 that uses nasal swabs and a battery-powered processing unit that provides results within 30 minutes.