You Are Here Home Health News Wildfires projected to increase in size and frequency, raising health risk for Canadians 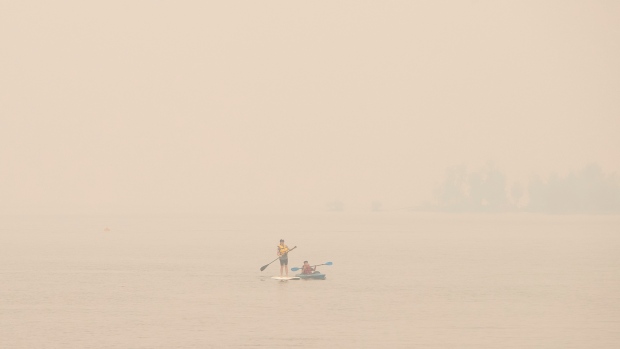 TORONTO — As Canada experiences a devastating wildfire season, researchers are warning that they’re projected to increase in size and frequency in coming years – raising the risk of adverse health effects for Canadians, including those living in cities.

According to a recent report, conducted by the Global Climate and Health Alliance, an organization comprised of health NGOs, health professional organizations, and health and environment alliances, Canada could see a 75 per cent increase in wildfire occurrence by the year 2100 if greenhouse emissions continue at a mid-range.

Because of this, the researchers said the country needs to be prepared to address the long-term impacts of wildfire smoke exposure.

In another Canadian study on the fires in Yellowknife in 2014, cases of asthma doubled and salbutamol (used to prevent and treat wheezing and shortness of breath) prescriptions dispensations went up by about 50 per cent in community pharmacies in areas impacted by the fires, compared to surrounding areas.

Rebecca Saari, an environmental engineering professor at the University of Waterloo in Ontario who was not involved in the studies, says that smoke and poor air quality could cause symptoms such as irritation, burning eyes, and coughing.

For those with underlying health conditions, such as respiratory illness, cardiovascular disease, asthma, or they’ve had a heart attack before, Saari said the risk of having an adverse health outcome is even higher.

“When we have really poor air quality days like this, including due to wildfire smoke exposure, we’ll expect to see more emergency room visits, more hospitalizations associated with acute bronchitis, or acute episodes associated with these underlying illnesses,” she told CTV’s Your Morning on Thursday.

“So if you have reason to be vulnerable already, then poor air days are not great news for your health.”

The report states that the risk of wildfires is projected to increase around the world as climate change intensifies, which will bring more frequent heat waves of longer duration and changes in rainfall patterns that will affect vegetation growth.

“Larger populations, including urban populations far from the forests, are being exposed to harmful and prolonged levels of wildfire smoke,” the report said.

For Canada specifically, the researchers said polar regions are projected to warm faster due to climate change than areas located closer to the equator.

“Canada is warming faster than many other parts of the world,” the study said.

Saari said this is a public health threat that Canada needs to prepare for in the coming years.

“In terms of the public health readiness, we need to boost systems that let people know what they can do to help avoid exposure during events like this,” she said.

While Saari said they already have online systems that show where the wildfires are and the air quality health index that shows how bad the levels are, Canada should expect to see more respiratory-related and cardiovascular-related illness in the future.

“Anything we can do to reduce those underlying risks,” she said. “So that means reducing the sources of air pollution that we can control more easily, things like fossil fuel in our power production or in industrial use or in transportation. If we can reduce the other sources of dirty air that are going to affect our health that would be a big help.”

Although it may sound dire, Saari urged Canadians to stay hopeful in the fight against climate change.

“We shouldn’t give up in trying to avoid making this worse. We can prevent future harm still,” she said. “To meet the climate change agreement targets, we have about a decade left to make some serious emissions reductions to prevent the worst effects of climate change.”