You Are Here Home Health News With Less Breastfeeding Support, Mothers Are Turning to Online Help 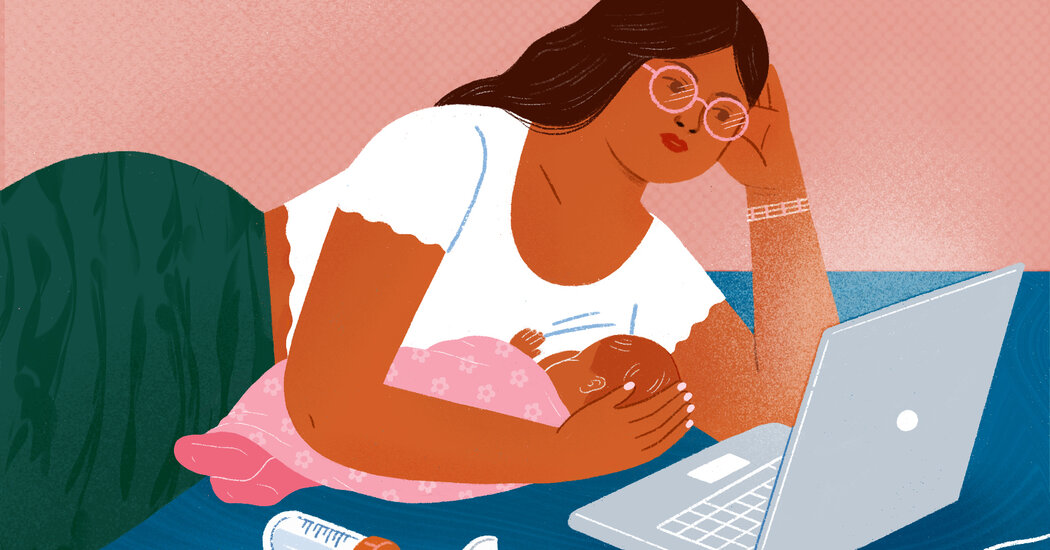 In the Before Times, mothers who were struggling to breastfeed didn’t have to look very far to get hands-on support.

There were baby cafes and new-mom groups; visits from friends and family; and lactation consultants who made house calls.

But during the pandemic, those resources and services have mostly shifted online.

“Some of the mothers that we counsel will go to the library and sit in the parking lot so that they can have internet service while we’re doing the support groups,” said Kimarie Bugg, the chief executive of Reaching Our Sisters Everywhere, a nonprofit working to increase knowledge about the importance of breastfeeding in the Black community.

But even mothers who do have internet service can find it awkward to receive support virtually.

“It’s been very, very frustrating to not have somebody in person,” said Mikia Davis, 31, an actor and substitute teacher in Atlanta, who has mainly been getting assistance over the phone and online.

Davis, who gave birth to her first child, a boy, in May, said her breastfeeding struggles started right away.

“Nursing, it hurt so bad for me,” Davis said. “I would be sweating, I would be clenching my hands together. And I hated that I felt like that because I would hear all these moms say it’s a beautiful bonding experience and I was like, I didn’t get that.”

Everyone kept telling her it wasn’t supposed to hurt, but she couldn’t figure out what was wrong. More than a month later, Davis discovered that her son had a slight tongue tie and an upper lip tie. A surgical procedure helped fix those problems, but the breastfeeding pain never fully went away and that left her feeling defeated.

“As a first-time mom, I wish I had taken a breastfeeding class while I was pregnant,” Davis said. “I just thought it was something that was going to happen naturally, that I would know how to do.”

Social isolation, an ever-present shadow during the pandemic, has led some mothers to give up on breastfeeding entirely.

“The whole infrastructure of how we support breastfeeding is being threatened,” said Laurence Grummer-Strawn, Ph.D., a former chief of the nutrition branch at the Centers for Disease Control and Prevention, and who is now the head of the Food and Nutrition Actions in Health Systems Unit at the World Health Organization.

Grummer-Strawn is concerned that the disruption of health care systems and the reduction in home visits and local support groups will have a negative effect on breastfeeding. Some parents are also afraid to go to local health clinics to get breastfeeding support, he added, and may even fear breastfeeding itself — though the latest research shows that there has not been any viable, infectious virus detected in breast milk so far.

During the pandemic, “I’ve had women who don’t want to nurse because they feel they don’t have enough help and it’s scary for them,” said Freda Rosenfeld, a board-certified lactation consultant in Brooklyn.

But even though many breastfeeding support systems can’t be in person right now, experts say it’s important that mothers continue to seek help if they need it. The benefits of breastfeeding have been well documented. And researchers have suggested that the presence of Covid-19 antibodies in the breast milk of previously infected mothers could provide babies protection against the virus. But what’s most important is to feed the baby by whatever means necessary, experts say. Some women who cannot exclusively breastfeed may need to rely on formula.

Davis eventually found help through the free, online baby cafe run by Reaching Our Sisters Everywhere. The group video chat was helpful, she said, because she learned a new way for her baby to latch, but she still wished it could have been in person.

Before participating in any online visits, Rosenfeld advises her clients to ask their partner, another family member or a friend to operate their phone or laptop camera, so that the mother doesn’t have to adjust the angle of the lens while also trying to hold the baby. Then Rosenfeld focuses on helping her clients feel comfortable.

“I also take a lot of questions and I don’t ask to look at their breasts until we’ve schmoozed,” she said.

Normally, Rosenfeld would put on a glove, put her hand in the baby’s mouth and examine how strong the baby sucks. But now she asks her client’s helper to do this, and tells them how to make various adjustments until the suck feels stronger before putting the baby at the breast.

During the call, she also shows her clients visual aides — a model breast, a doll, a receiving blanket and a pillow — so the mother can mimic her moves, Rosenfeld said.

Ideally, breastfeeding education and preparation should start even earlier, experts said, before the baby is born.

Serena Meyer, a nurse at a hospital in San Francisco and international board-certified lactation consultant, said she’s found, anecdotally, that some women are opting out of taking an online tutorial.

“People don’t know how to access them online, they don’t want to pay for them, they don’t understand the value,” said Meyer, referring to the online offerings for prenatal education.

With masks and face shields, in-person lactation consultants need “really good, expressive language” right now, she said, “because you’re all the way in your gear trying to explain how a baby is going to latch onto something and your mouth is covered. So it’s hard.”

Caroll Taveras, who gave birth to her first child at home in Brooklyn in July, said she took an online childbirth class but hadn’t considered an online breastfeeding class, in part because she assumed breastfeeding would come naturally to her. Instead, she opted for an in-person visit with Rosenfeld, her lactation consultant, who is offering $250 office visits in lieu of house calls.

“What we’ve heard is that many hospitals are just routinely doing separation,” Grummer-Strawn said, referring to the practice of separating mothers from their newborns in the hospital, regardless of whether they had tested positive for the coronavirus — though he acknowledged that things might be getting better now that expert guidance in the United States has changed.

Initially, the A.A.P. had advised temporary separation of newborns from their infected mothers and the C.D.C.’s earliest recommendations seemed somewhat vague, which made it tougher for some new mothers to start breastfeeding.

“In clinical life, this led to some crazy situations, such as mother and infant being separated in the hospital for 48 hours, and then being escorted, isolated from each other, to the front door of the hospital and then placed in the same car to go home to a place where physical distancing was not possible,”said Alison Stuebe, M.D., the president of the Academy of Breastfeeding Medicine and a professor of obstetrics and gynecology at the University of North Carolina.

But the A.A.P.’s latest guidance recommends that mothers with Covid-19 room with their newborns, which allows them to breastfeed, and take precautions to protect their babies from catching the virus. The new policy stemmed from data indicating that the likelihood of getting the virus was similar for infants who were separated from their mothers compared with those who roomed with mothers.

Because of the pandemic, there are some areas, like New York City, where women have been discharged from the hospital faster than they ordinarily would have been after giving birth, potentially resulting in fewer visits with a hospital lactation consultant.

“Moms are really struggling in the fourth trimester,” Dr. Stuebe said. She and her colleagues at the University of North Carolina at Chapel Hill offer breastfeeding guidance on their website, NewMomHealth, which they describe as a modern village that aims to change the way America treats new moms.

Although some mothers have arrived home from the hospital without their usual “village” in place, there are others who say they have more support because of the lockdown.

Erin Bestreich, 36, a speech pathologist who gave birth to identical twins in April, said her husband was able to stay home during the first few months after the babies were born, so he would help her breastfeed. Their nanny also stayed with them during the quarantine while Bestreich received breastfeeding support online.

“They were both very, very supportive of my breastfeeding and I wouldn’t — and still could not — do it without them,” she said. “Also, I had nowhere to go, so it made it easier to focus on feeding.”

Lori Feldman-Winter, M.D., the chairwoman of the A.A.P. section on breastfeeding and a pediatrician at Cooper University Health Care in Camden, N.J., said one way to keep the milk flowing is to try to make sure milk is drawn out either manually or by the baby in the first hour after delivery. But be prepared for different challenges that can emerge as the baby gets older.

“Breastfeeding is an evolving skill,” she said, adding that continual support is crucial.

For Dr. Feldman-Winter, online breastfeeding consultations are nothing new. For the past decade she has occasionally spoken to women from as far away as Ghana and Israel by video, teaching them how to reposition their babies until they learned how to do it themselves.

“You can’t dance for the mom or the baby,” she said. “They need to learn how to dance together.”