You Are Here Home Health News With some provinces reopening, where does Canada’s PPE supply chain stand? 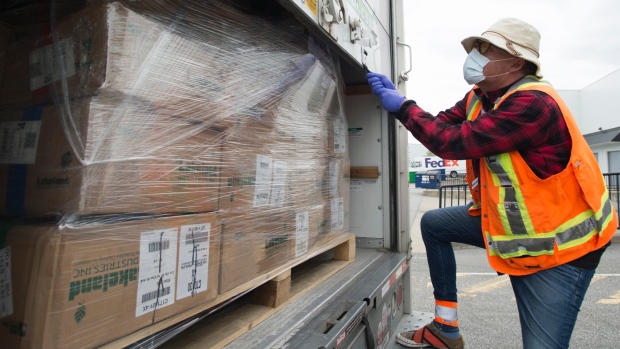 Acquiring PPE has been a major challenge for the government during the pandemic, as many countries have been outbidding each other and competing for access to a limited supply of masks, respirators and other items.

The situation in China, where much of the world’s supply of PPE is manufactured, has been likened to the “Wild West,” with chartered planes being turned around and sent home after a higher bid came in for the supplies they were meant to carry. Last month, this affected two flights organized by the Canadian government.

This is important not only because health-care workers and others exposed to COVID-19 patients need protection from the disease, but because adequate supplies of PPE are a key factor in plans to reopen closed parts of society – and some provinces are ready to move ahead with reopening.

“As we open up and as we get more and more transmission, potentially … we have to make sure that when patients do start coming to the hospitals and we do start seeing another surge, that PPE is still available,” Dr. Zain Chagla, an infectious disease specialist at St. Joseph’s Healthcare in Hamliton, Ont., told CTV News Channel on Sunday.

Speaking remotely on Sunday at a press conference in Ottawa, Public Services and Procurement Minister Anita Anand said Canada’s ability to get PPE out of China has improved markedly since the days of empty planes flying out of the country. She noted that there have been “flights coming in nearly every day this week,” including Friday night’s arrival of the world’s largest cargo plane.

“In a competitive environment, our dedicated team on the ground in China ensures that supplies are coming into the warehouse and making their way onto the planes back to Canada,” Anand said.

As the government finds its footing in securing PPE from China, domestic manufacturers are retooling their factories to produce the needed equipment, making Canada less reliant on imports.

Reagents, the chemicals used in the processing of COVID-19 tests, are one example of this. In the early days of the pandemic, Canada faced a backlog in conducting its tests due to a shortage amid the high global demand for reagents. Now, New Brunswick-based LuminUltra is capable of producing enough reagents to handle a load of 500,000 tests per month until next year.

Anand detailed several contracts the government has signed with Canadian manufacturers, saying an agreement with Medicom calls for 80 million surgical masks per year over the next 10 years from the company’s factories in Quebec, as well as 20 million N95 respirators.

Signing the contracts is only the first step, though. According to government figures, Canada has ordered more than 52 million face shields, hundreds of millions of masks and more than one billion pairs of gloves, although only a small fraction of those supplies have been received.

To help smooth out the pathway from ordering to acquiring, the government has created what it is calling the COVID-19 Supply Council, which is advising the government on how to build supply chains capable of handling Canada’s demands now and in the future, including if the pandemic worsens. Its members include many business, manufacturing and transportation stakeholders, as well as representatives from groups such as the Canadian Pharmacists Association and the Canadian Red Cross.

“From manufacture to arrival or production in Canada, what is it that we can be doing differently to ensure that we have proper and effective and efficient procurements within our government and across the country?” Anand said.

“This is procurement like it’s never been done before.”