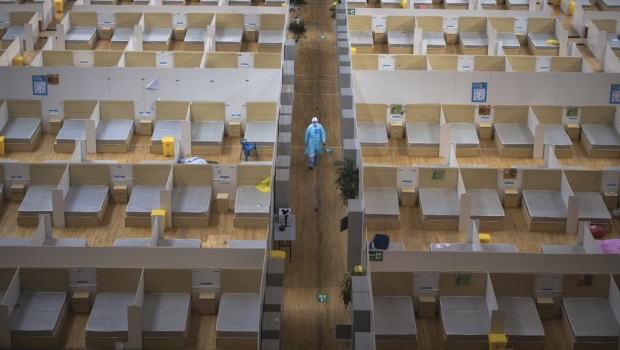 BEIJING — China’s president visited the centre of the global virus outbreak Tuesday as Italy began a sweeping nationwide travel ban and people worldwide braced for the possibility of recession.

President Xi Jinping’s trip to the coronavirus’ epicenter of Wuhan — his first since the start of the outbreak — came as parts of his country return to normalcy, and was a sign of the diminishing threat the illness presents in China as it spreads west.

Nowhere was that more evident than Italy, where travel restrictions previously limited to the country’s north were extended everywhere beginning Tuesday, with soldiers and police enforcing bans. Some 9,172 people were infected in Italy and 463 have died and there was a growing sense the numbers would only worsen.

“We’re only at the beginning,” said Dr. Massimo Galli, head of infectious disease at Sacco Hospital in Milan, where people at the city’s main train station were required to sign forms certifying the necessity of their travel.

Outbreaks flared in France, Spain and Germany, and fear grew in the United States, where more than 750 people are infected and even some senior political leaders were quarantined.

For most people, the new coronavirus causes only mild or moderate symptoms, such as fever and cough. For some, especially older adults and people with existing health problems, it can cause more severe illness, including pneumonia.

The World Health Organization says people with mild illness recover in about two weeks, while severe cases may last three to six weeks. In mainland China, where the outbreak emerged in December, almost three-fourths of its more than 80,000 patients have recovered.

Regardless, the virus has shaken global markets, with stocks taking their worst one-day beating on Wall Street since 2008 and oil prices suffering their most brutal losses since the start of the 1991 Gulf War.

Even with Asian markets posting modest gains Tuesday, fear was rampant that economies stood at the brink of recession.

Xi’s trip to Wuhan came as the country recorded just 19 new cases of the virus Tuesday. The official Xinhua News Agency said Xi went to a hastily built hospital, visited with patients and encouraged staff to “firm up confidence in defeating the epidemic.” He then visited Wuhan residents under quarantine at home, Xinhua reported.

The visit also was likely to be seen as an attempt to bolster views of the ruling Communist Party’s handling of the crisis. Xi was conspicuously absent from the public eye during the early days of the outbreak and alarms were not sounded until late January.

Wuhan and nearby cities have been under lockdown since then, though, in a virus-containment measure.

Ying Yong, the party secretary of Hubei province where Wuhan is located, told local officials that preparations should be made for resuming business production and the safe and orderly movement of individuals, according to a notice published on Hubei’s government website.

Already, there are signs the lockdown is loosening. Jingzhou, a city in Hubei, has ordered roads and village entrances in low-risk areas to be reopened to restore agricultural production. And Hubei’s government said Tuesday it is launching an app-based system in which people who are deemed healthy and not at risk are given green codes to allow them to travel freely within the province.

The edge toward normalcy in China and improving reports from South Korea — where new infections continued to dip — contrasted with a widening problem elsewhere in the world.

Italy’s far-reaching restrictions were to last through April 3 and violators risked up to three months in jail or fines of 206 euros ($225). Schools and universities were remaining closed and pubs, eateries and cafes were to shutter at dusk.

In Soave, a wine-producing town near Verona, normal bustling streets were nearly deserted.

Cafe owner Valentino Bonturi said he was enforcing new restrictions to ensure patrons weren’t bunched too closely, meaning people needed to be seated rather than stand at a counter, as is customary.

In the U.S., President Donald Trump was planning to announce proposals Tuesday aimed at curbing the economic fallout from the outbreak. He said the measures would include payroll tax relief.

Trump dove into handshakes with supporters Monday and flew back from a Florida fundraiser with a lawmaker who later went into a voluntary quarantine because he came into contact with someone who had tested positive for the virus. Trump’s incoming chief of staff, too, went into quarantine, also stemming from concerns from a conservative political gathering attended by an infected person.

In California, the cruise ship Grand Princess, which had been forced to idle off the coast, docked at the Port of Oakland, but only a few hundred of some 3,500 passengers and crew had disembarked by early Tuesday.

Worldwide, more than 114,000 cases of the virus have been reported in about 100 countries. The leader of WHO, Tedros Adhanom Ghebreyesus, said Monday, “the threat of a pandemic has become very real.”

The most recent additions are Panama, adding to a few dozen cases in Latin America, and Mongolia, which borders China. Authorities there said Tuesday the country’s first virus patient was a French energy worker who met with colleagues and travelled while he was infected.

Sedensky reported from Bangkok. Contributing to this report were Colleen Barry in Soave, Italy; Nicole Winfield in Rome; Antonio Calanni in Milan; and Ken Moritsugu in Beijing.