You Are Here Home Health News Yes, Kids Can Get Migraines. Here Are the Signs. 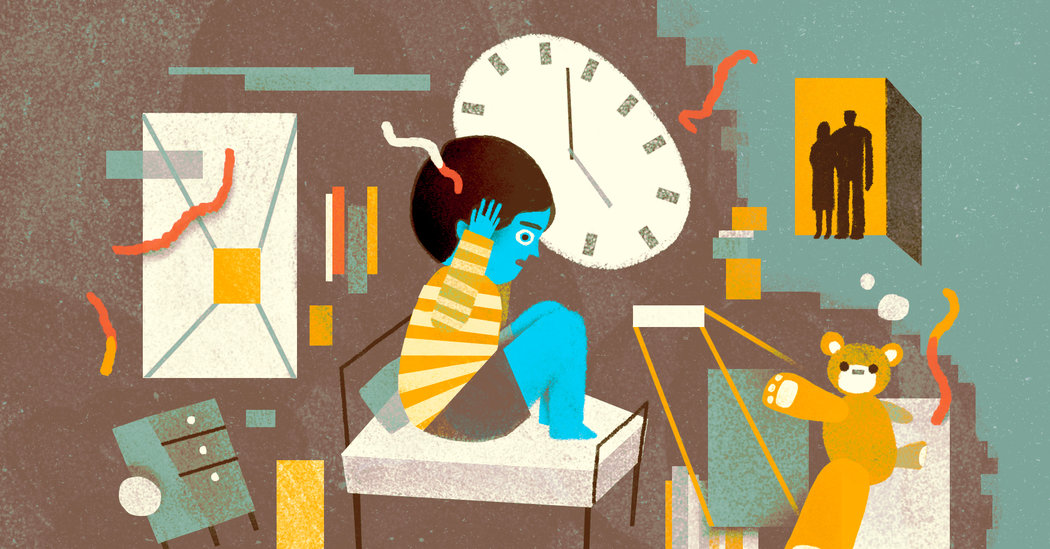 A couple of years ago, long before the novel coronavirus was a threat, my son started calling out to us soon after we tucked him in at night. Sometimes he would ask for an extra kiss, back rub or drink of water. All normal for a 5-year-old. But occasionally, he would report that his room looked funny. “Things that are close look far,” he would say. “And things that are far look close.”

When he continued to periodically describe his room like it was full of fun house mirrors, my husband decided it was time for an internet search. Alice in Wonderland syndrome, a neurological condition that causes a distorted sense of perception, came up as a potential cause. That was intriguing to us because condition can be affiliated with migraines. My son occasionally complains of headaches that I have always attributed to dehydration, congestion or bonks on the head. Even though I get migraines, I never considered them possible in a kindergartner.

It turns out headaches — including migraines — are more common in early childhood than I thought. By middle school, about 80 percent of kids have experienced a headache of some kind, often because of stress, a virus or another cause, said Scott Powers, Ph.D., a pediatric psychologist and co-director of the Headache Center at Cincinnati Children’s Hospital Medical Center.

Migraines generally involve a pounding type of pain that worsens with activity. Adult migraines typically cause pain on one side of the head while migraines in children tend to cause pain that stretches across the forehead. Migraines may also cause a person to feel nauseous or throw up. In some people, they also come with auras, or visual distortions that can appear like zigzag lines or flashing spots in adults. In children, auras might produce altered perceptions of size and color that appear in Alice-in-Wonderland syndrome.

Migraines, which can start as early as infancy, occur in up to 3 percent of 3- to 7-year-olds, up to 11 percent in kids ages 7 to 11, and up to 23 percent by age 15 in the United States, according to some estimates. They become more common as children age, eventually splitting by gender. By adulthood, about 18 percent of women and 6 percent of men get them. Migraines are a chronic, often lifelong condition, Dr. Powers said, with data suggesting that the majority of children with migraines become adults with migraines.

As common as migraines are among children, and adults, there is no objective medical test to identify them and young people don’t always have the verbal skills to describe their pain. Older kids may be dismissed as faking to get out of school. Even the most well-meaning parents may not realize that kids can get migraines, said Dr. Amy Gelfand, M.D., an associate professor of neurology and director of Pediatric Headache at the University of California, San Francisco. In her practice, she often diagnoses parents at the same time as she diagnoses their children.

Still, with adequate care, most children can reduce the number and severity of migraines they experience. “We are very good at getting kids with migraines better,” Dr. Powers said. “There’s a lot of hope.”

Migraines are a neurological condition, Dr. Powers said, and people who get them also experience changes in the brain related to pain- and emotion-processing, although it’s not clear whether one causes the other. Certain circumstances — like sleep disruptions, dietary changes, bright lights, the glare of the sun or strong smells — can bring on a migraine in those who are susceptible.

“The way I explain it to kids is that your brain is just a little more sensitive to things happening than someone who doesn’t have migraine,” Dr. Powers said. So if you get too much or too little sleep, or if you’re dehydrated, “your brain is like, ‘Hey, I don’t like that,’” he said.

To diagnose a migraine in children, experts suggest looking for clues in their behavior. They might point at or grab their head, climb into bed and hide under the covers, or ask to retreat to a dark, quiet room. A loss of appetite may be a sign of nausea. Family history is another sign: About 60 to 70 percent of people with migraines have a parent or sibling who has had them or may have had them, according to the Cleveland Clinic.

Babies and toddlers can get migraines, which surprised Katrina Swenson, a mental health professional in Washington State and mother of a migraine sufferer who is 5. Looking back, she said, her son started showing symptoms of migraines before he turned 2. Out of nowhere, he would get upset and lie on the floor, then vomit, act tired and fall asleep. Because he has a motor speech disorder, which makes it hard for him to talk, he couldn’t explain how he was feeling, though he would occasionally hit his eye or claw at the side of his face. Eventually, he learned to sign that his head hurt. But it wasn’t until he was nearly 4 that an occupational therapist mentioned migraines as a possibility. He was diagnosed a few months later. “For over four years, migraines never even occurred to me,” Swenson said.

If you suspect migraines in a young child, health experts recommend scheduling an appointment with a pediatrician, who may suggest that you keep a headache diary, visit a specialist or get an imaging test to rule out other potential issues that can cause headaches, such as stroke, a congenital brain problem or meningitis. Red flags that suggest something else include weakness or numbness on one side of the body, seizures, or confusion during a headache, Dr. Gelfand said.

Diagnosing migraines in young children can require creativity, and many clinics supplement evaluations by asking children to draw their headaches — a technique that, studies suggest, can accurately predict diagnosis 90 percent of the time. In pictures drawn by his young migraine patients, Dr. Powers said he sees a lot of crying and other visual representations of intense pain. “You’ll see kids draw stick figures with something like a knife pounding the head,” he said. “It kind of gives you that sense that it’s a pounding, throbbing pain.”

For children of any age, ibuprofen (Advil) or acetaminophen (Tylenol) work best when given as soon as a migraine starts. If your child is older, a doctor might recommend other medications, including anti-nausea medications, a liquid antihistamine called cyproheptadine, or a class of medication called triptans, which are often used to treat migraines in adults and some of which are approved to treat children. Laying in a dark room, putting a cold washcloth on the child’s forehead and other comfort measures can also help.

If your child gets migraines frequently, certain regular habits might stop them before they start. Ensure your child is: receiving three square meals (plus one or two snacks) per day; getting the recommended daily activity levels for their age; hydrating enough; and sticking to a predictable sleep schedule. Some evidence suggests that certain relaxation and cognitive behavioral techniques, like deep-breathing exercises, can help too, Dr. Powers said.

Researchers also continue to study the basic science of how migraines work, with the hopes of developing more treatments and preventive techniques.

As for my son, now 7, he stopped seeing the world through the looking glass after a while, and we never confirmed Alice in Wonderland syndrome or migraines. Regardless, I have become more vigilant when he says he has a headache. Instead of discounting it as a sign of fatigue or a cold coming on, I consider whether it could be a migraine. We don’t know yet for sure, but at least now, the possibility is there.